This is the default teaser text option. You can remove or edit this text under your "General Settings" tab. This can also be overwritten on a page by page basis.

Sea Kayaking
Sea kayaks allow the paddler to slip silently across the waters, explore shallow inlets and coves, and approach marine mammals and birdlife without disturbing their calm. Previous experience is not necessary. Our expert guides will provide instruction in technique and with safety. We use double and single sea kayaks for our expeditions. You can expect to paddle for approximately 4 hours per day.

Due to the unpredictability of weather, participants must be willing to expect the unexpected. As we are moving camp each day, there may be the need to paddle for longer than intended periods to accommodate winds, or rough water. Unsafe water conditions may necessitate sitting on shore until conditions for safe travel present themselves.

Guides
Our guides have many years of experience in the outdoors and are expert and certified in sea kayaking. They are familiar with the natural and cultural history of the area in which you will be traveling, trained in wilderness first aid, and committed to your satisfaction and safety. 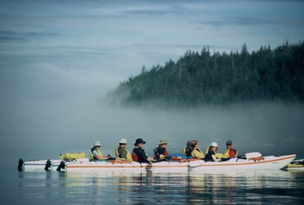 Group Size
In order to minimize our impact on the area we are visiting, for safety, and for creating a better environment for group interaction, we keep our group size to a maximum of 10 participants.

Weather
Summer temperatures from July until mid September are generally quite comfortable with temperatures ranging from 18 – 25 degrees Celsius / 70 – 80 degrees Fahrenheit. Early July and later September will have the cooler temperatures, and at any time of year we can have rain and wind, with temperatures occasionally as low as 13 C / 55 F. It is best to come prepared for any type of weather.

Your Part
Both beginners and experienced hikers and paddlers of all ages join us on our trips. All you need are the items identified on our equipment/clothing list, be reasonably fit, have a sense of adventure, and be willing to accept the unexpected.

Menu
Our menu is designed to fulfill the nutritional needs of our expeditions. Lunches and dinners are diverse, often supplemented with fresh vegetables and local favourites. There is always enough food to offer seconds. Guests are often surprised and pleased with what we offer on our menu. We do accommodate special dietary needs.

“I just wanted you to know my son and I have the most terrific time on the Johnstone Strait [Pacific Orcas] kayaking trip. Kris and Janet, our guides, were fantastic. They both had such a deep love of the country, respect for the whales, and genuine enthusiam, it was a real treat to have them as our guides.”
Tim Ward, Travel Writer, Washington Post, Washington, DC 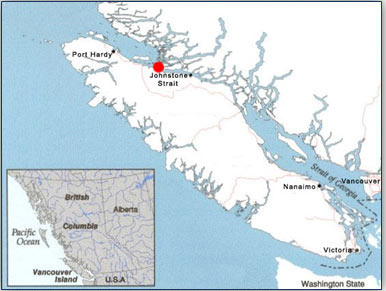 Johnstone Strait is a magical glacier-carved waterway located between the northeast coast of Vancouver Island and the British Columbia mainland and it is a sea kayak touring paradise. Adjoining Queen Charlotte Strait and the Broughton Archipelago at its northwest end, Johnstone Strait is part of a historic marine region including Robson Bight, the world’s only killer whale (orca) sanctuary. It is home to a myriad of diverse wildlife, including the largest resident population of orcas (killer whales) in the world. The Johnstone Strait area is a sea kayaking dream, boasting beautiful summer weather, glass-calm waters, and some of the most spectacular wilderness scenery on earth.

We will do our best to locate orca pods. The route we follow, and the area we kayak, does present the best opportunity to view orcas. However, they are wild animals and Johnstone Strait encompasses a huge area, so we cannot guarantee sightings. It is also important to note, that should we encounter orcas, we, by conscience and by agreement with private and governmental stewards, respect a 100-meter off-limits zone.

As kayaking goes, there is little to compare with the thrill of paddling alongside these awesome, exhilarating, and magnificent mammals. 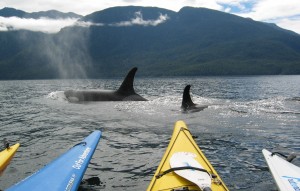 Coupled with this, is the myriad of small bays, sandy beaches, protected coves, lush rainforest and marine wildlife that is characteristic of these waters.

Day 1:
We will drive north along the Island Highway to our put-in point in Johnstone Strait.

Days 2 – 5/6 :
Tides, currents, group ability, group goals, and the distribution of orca pods will ultimately decide our campsites, paddling time, and route, and as such, a day by day, precise itinerary, is undesirable & impractical.

We have developed an itinerary that focuses on the areas in Johnstone Strait that best present the chance of viewing orcas. We avoid the busier marine traffic around Telegraph Cove and the islands in that area. Along the way, there will be opportunities to explore the many coves, beaches, and marine life that characterize the strait. Different campsites are planned throughout our paddle.

Day 6/7:
We will return to our put-in point and return to Vancouver sometime in the evening.

Nine Day Tour /Total immersion into orca waters
The tour is expanded into the many small islands and protected waters of Broughton Archipelago Marine Provincial Park make the area an excellent place to sea kayak. Our guests come from around the world to kayak among killer whales and other marine mammals, camp in an unspoiled wilderness and learn about First Nations culture. The southern portion of the park is the most popular, particularly in Village Channel and Indian Channel, however, the rest of the park also offers excellent kayaking waters. We will enjoy the tranquil beauty of this area as we paddle our way through a myriad of islands and islets, stopping to camp at various locations along the way.

These islands have been utilized by First Nation peoples for generations and there is ample evidence of their extensive use of the area. We will see the white midden beaches, culturally modified trees, clam “terraces” and even a petroglyph while exploring the park.

Day 1: Transport to Telegraph Cove on Vancouver Island. Dinner at the Saltery Pub, a historic building in Telegraph Cove. Camping.

Day 2: On the water, kayaking after breakfast. Kayak orientation about paddling and safety. Rough weather and we will transport by water taxi to Broughton Park. Camping along the shore of the Johnston Strait.

Days 3 to 8: Cross Johnstone Strait to Broughton. Open exploration based on weather and group interests. Different camp each night.

*Special Day *: We will use one of the days to visit Echo Bay and the Billy Proctor’s Museum, where 1000s of artifacts from the area are on display. The evening will be spent at a floating lodge called “the Paddlers Inn”. Opportunity to refill water supply, shower, and sleep on a bed. Hope to stop at the ancient native village of Meem Quam Leese and explore its decaying totems and longhouses.

Day 9: On our last day, we’ll linger over breakfast; possibly pack up camp, and board our water taxi for the return journey to Telegraph Cove, arriving by about 10.30 AM. After pack up and lunch we begin our journey south back to Vancouver. 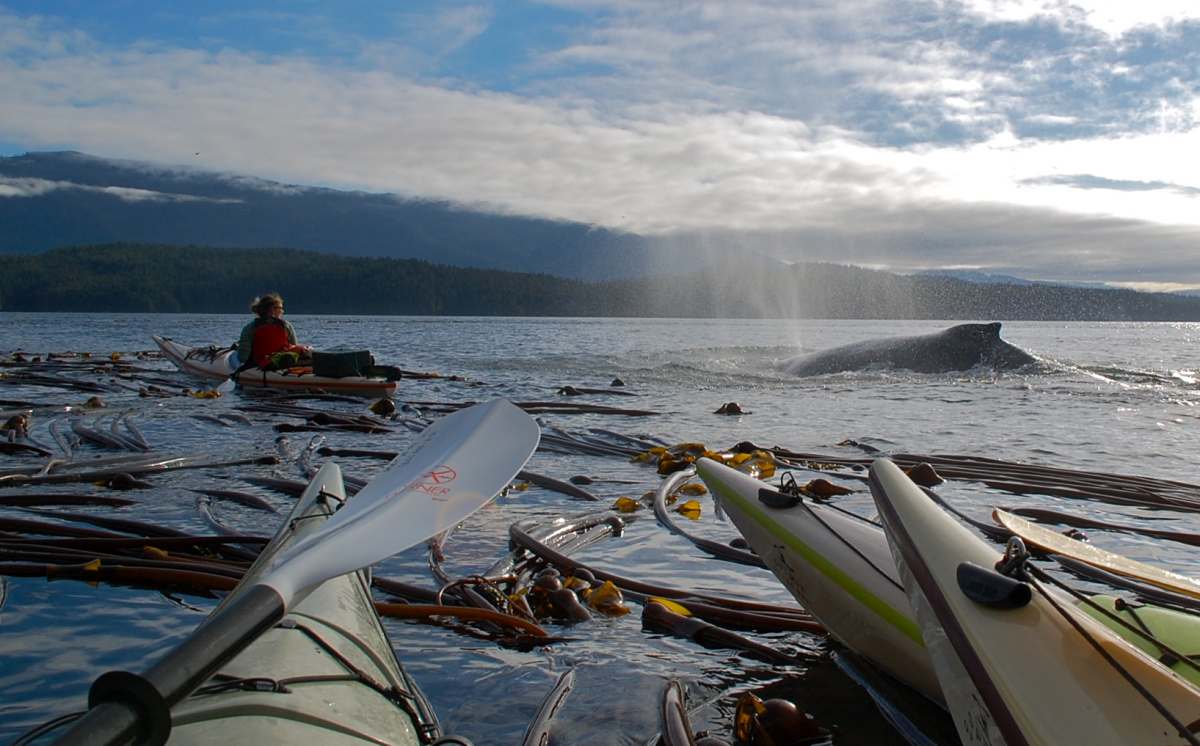 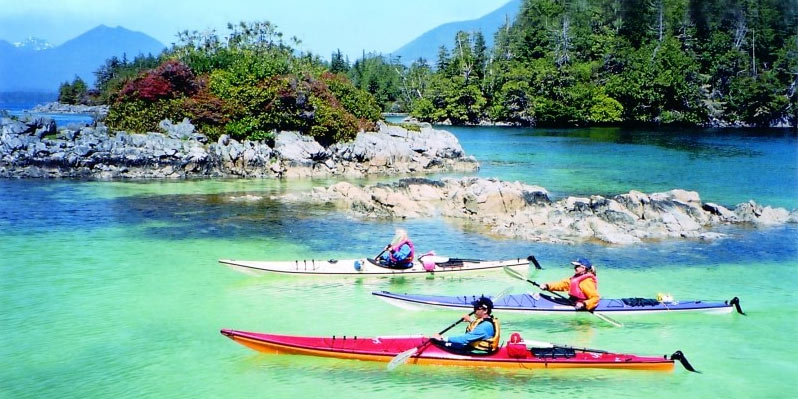 “Our BGI adventure exceeded the experience we had looked forward to. Both Krista and Erin are truly talented both as leaders and outdoorspeople. Krista was excellent at bringing a group of strangers from several nations as a cohesive team in mere hours. I was constantly impressed by her knowledge of seamanship, navigation, tides, and also her willingness to go the “extra mile” to help us. Erin was a very effective second and her meals on the trip were excellent.”
Gerry & Candy Roney, San Jose, CA 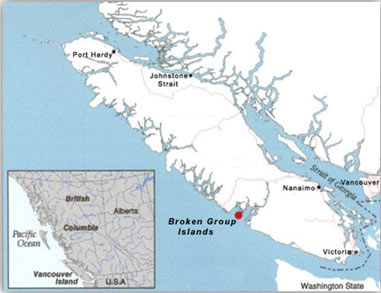 2. Broken Group Islands
Off the west coast of Vancouver Island, a vast maze of islands, islets, and rocky outcrops thrust upward from the gentle waters of Barkley Sound. A kayaker’s dream, the sheltered hundred-plus islands comprise what’s known as the Broken Group—a favorite vacation spot for Vancouver residents and paddlers from around the world.

Formed at the end of the last Ice Age, the islands’ rugged bedrock and nutrient-rich waters support ample marine life, as well as old-growth rain forests, lagoons, arches, blowholes, tide pools, and sandy secluded beaches. Stone fish traps and the remains of villages—traces of culture from the aboriginal Nuu-chah-nulth people—add an element of curiosity and discovery to a paddle through the Broken Group’s narrow passageways

For a true wilderness experience, backcountry camping is permitted in designated areas on seven of the islands. All of the spots are family-friendly and include composting toilet facilities.

Day 1:
We will drive north and west along the Island Highway to our put-in point and campsite at Secret Beach in Barkley Sound. The remainder of the day will be used to provide kayaking skills instruction and discuss safety protocol. Weather permitting we will practice our paddling skills near camp.

Days 2-5- An exact itinerary of where we go will be determined by group ability and weather conditions. There are so many beaches, islands, campsites, and channels to explore that route choice is unimportant.

Day 6- We will make our way back to our put-in point and return to Nanaimo, and by ferry to Vancouver. 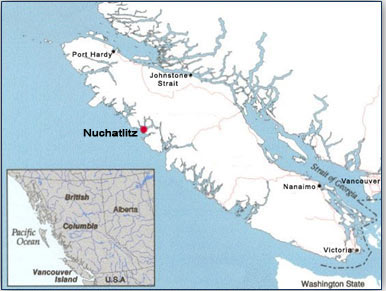 The Nuchatlitz archipelago on the remote northwest tip of Nootka Island is the quintessential sea kayak tour destination. A myriad of islands and inlets provide a combination of open coast & protected water paddling, rich in culture & history, and undoubtedly the best wilderness camping on the west coast of Vancouver Island.

This provincial marine park is vital habitat for British Columbia’s recovering sea otter population. Sea otters were hunted along the BC coast during the fur trade in 1800’s and were extinct by the early 1900’s. 89 Sea otters from Alaska were transplanted along the northwest coastal waters in 1969-1972. The present population is an estimated 2000 descendants, one of the largest Sea otter populations in the world. They are a common sight among the rich kelp forests, often feeding on urchins and shellfish. It is not uncommon to see large ‘rafts’ of Sea otters in Nootka Sound.

Day 1: Ferry from Tswwassen to Naniamo. The van journey will take us up island to Campbell River for lunch and then to Zeballos.  Night  in Zeballos getting to know each other and preparing for our day on the water tomorrow.

Day 2: We will put in at Little Espinosa Inlet near Zeballos, where guides will go over kayak procedures and skills. We head south along the shoreline then cross Esperanza Inlet to our new home for the next few nights, Flynns Cove. on Nootka Island. This makes a good first days paddling objective.

Days 3-6: From  Flynns Cove, we will visit a variety of islands in the Nuchatlitz group. We will keep our eyes open for the floating rafts of sea otters which are often seen amongst these islands.

Day 7: We pack up and begin heading back toward Zeballos and our vehicle. Usually back and packed by early afternoon, continue the journey south towards the ferry and the mainland. 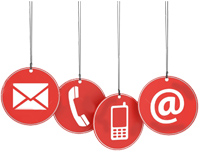 National Geographic Adventure Magazine
NGAM recognized us as one of the top tour companies in the world from 2009-2013. It no longer maintains a ranking of adventure companies, but we still maintain the same environmental and client practices that earned us this prestigious acknowledgment in the past.

National non-profit organization dedicated to promoting and inspiring responsible outdoor recreation through education, research, and partnerships. Leave No Trace builds awareness, appreciation, and respect for our wildlands. Sea to Sky Wilderness Adventures is a proud member that strives to meet the principles of the No Trace Canada code of ethics.

KEEP IN TOUCH: Receive an annual email detailing adventures and dates. We will not sell or share your email address with anyone or any company.